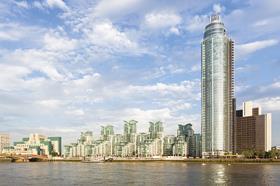 The boss of Berkeley Group has admitted its St George’s Wharf scheme at Vauxhall could have been better, but vowed the developer had learned from past mistakes.

Tony Pidgley, Berkeley chairman, admitted the development, designed by architect Broadway Malyan, including the 180m tower (pictured), which was nominated for the Carbuncle Cup last week, was not the firm’s finest.

“I am not going to defend it, but we built 1,000 homes on a site that had been derelict for 60 years when no one would build south of the river,” he said.

“That building went through a democratic process and it went through the Cabe [design review process]. I’m not un-proud of it. But we are prepared to live and learn.

“Originally we were just builders, just putting stuff up. But now we think about the community, we look at the site and its surroundings and think about what will make it better.

“We have made our mistakes in the past with some of the buildings and we have learned those lessons over many years.”

Pidgley said this would bring “world class” architecture to the site, as well as affordable homes and community benefits. He described the nomination for the Carbuncle Cup, which is run by Building’s sister title Building Design, as “sad” but welcomed the debate on the quality of tall buildings and public realm.

Pidgley’s comments came as Berkeley posted a 40% jump in profit to £380m in its results for the year to 30 April 2014, after the firm completed 30% more homes last year than during the 2007 market peak.