FCA moved out over the summer 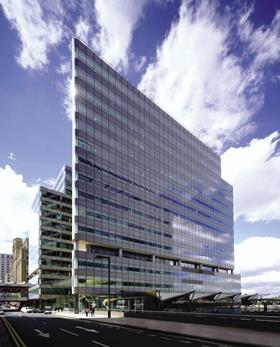 Sir Robert McAlpine and ISG are among the big names eyeing a £70m deal to refurbish the former Canary Wharf offices of the Financial Conduct Authority.

The City watchdog moved into its new London offices at Lendlease’s International Quarter London development at Stratford in July after more than 20 years at 25 North Colonnade (pictured).

The 15-storey building, which was bought by US private equity giant Blackstone four years ago, will now undergo a revamp and is being marketed by agents Knight Frank as ready by late 2020.

Other firms thought to be interested in the job include Bam.

Work will involve recladding the lower levels and remodelling the building’s north and south reception areas.

Blackstone is also planning to develop a multi-use Market Hall idea across the lower halls for events and pop-up attractions.

Architect on the scheme, which is next door to Foster + Partners’ Canary Wharf Crossrail station, is US practice Gensler.