More firms are eyeing the next phase of work at the Vauxhall site where Mace last week picked up a near £500m job for Chinese developer R&F Properties.

The firm won the first phase of work at the Nine Elms Square project which is being built on a stretch of land next to the US embassy at Nine Elms in south London.

Mace is building three towers for R&F under a management contract and already firms are looking at the next phase of the job which has a similar £500m price tag.

Building understands Laing O’Rourke and JRL Group are both interested in parts of the second phase which is set to be let under a design and build contract. Mace is also expected to run the rule over this phase as well.

Designed by US architect SOM, the three buildings Mace is building will range from 36 to 54 storeys and will provide 880 apartments running across 11,555 sq m. SOM is also behind the second phase.

Nine Elms Square is being built next door to Multiplex’s One Nine Elms, which has been designed by another US architect, KPF, and involves two towers of 56 and 42 storeys. It has a construction value of more than £650m.

R&F is also developing the Queen’s Square site in Croydon, which includes the former Nestle building, after buying it from Delancey in spring 2017. 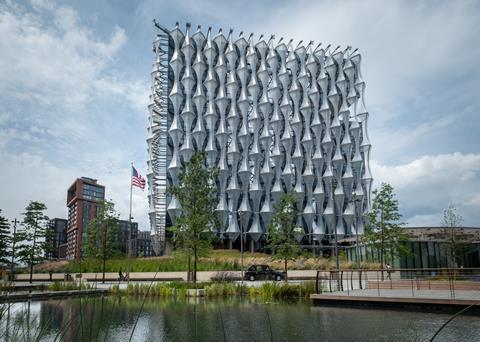 The new US embassy, which opened last year, has kick-started a swathe of redevelopment work at Nine Elms