Big-name contractors have been put on notice that a scheme to redevelop the IBM building on London’s South Bank is up for grabs after plans were submitted for a makeover of the brutalist icon.

AHMM’S proposals will see two new storeys added to the building which was designed by the firm of National Theatre architect Denys Lasdun and completed in the mid-1980s.

Building understands the work has a price tag of between £150m and £200m with Stanhope expected to run a competition for the job rather than award a negotiated contract.

Firms expected to run the rule over the scheme include Multiplex, Balfour Beatty and Mace. Others also set to throw their hats into the ring include Skanska, Lendlease and Sir Robert McAlpine.

The client said AHMM’s proposals would deliver new public space to ease crowding on the embankment walk, while the building’s currently unused terrace areas will be opened up to provide amenity space for occupants.

Planning documents submitted to Lambeth council said more than 20,000sq m of new business-use space would be created as part of the proposals, which would see the building’s gross internal floorspace increase from just under 28,000sq m to more than 50,000sq m.

AHMM’s scheme includes enhancements to the ground floor of the existing building, which sits beside Lasdun’s National Theatre, along with new restaurants and cafes fronting Queens Walk and the river Thames.

Wolfe said workspace for 2,000 additional employees would be created, while the additional storeys would “respect the brutalist architectural style of ‘stratification’ and setting with the adjacent National Theatre”. While the NT is listed at grade II*, the IBM building has only local recognition.

Lambeth has listed a statutory expiry date for determining the application in early May but a longer timescale may have been agreed with the project team.

The proposals are open to public consultation until 5 March.

The IBM building, which is the firm’s European headquarters, was once owned by Alan Sugar, whose real estate arm Amsprop sold it to Saudi investors seven years ago in a deal understood to be worth around £120m. 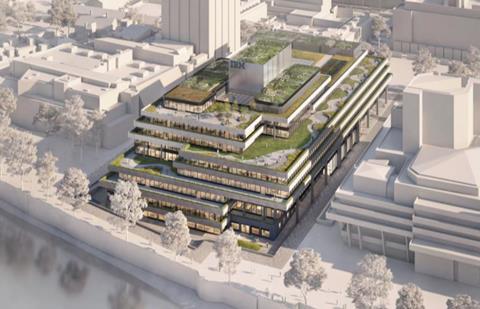