Locals will have the chance to run the rule over the next phase of the £700m Paradise development in Birmingham when the next scheme planned goes on public display next month.

The entire site has been masterplanned by local firm Glenn Howells Architects which is behind the latest scheme, an office block called One Centenary Way.

Howells is already behind one of the first two office blocks underway at the city centre site, a development called Two Chamberlain Square which is due to be completed by BAM in 2019. 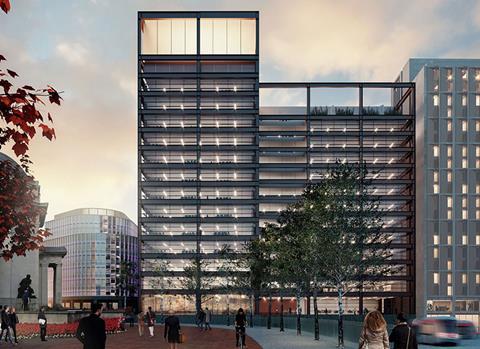 The first block, called One Chamberlain Square, is being built by Carillion and has been designed by Eric Parry Architects, the firm behind the City of London’s planned tallest tower – the 73-storey 1 Undershaft building.

Running across 290,000 sq ft, One Centenary Way will include shops and restaurants with developer Argent due to submit a planning application to the city council towards the end of this year.

The proposals will be on show on 5 September.

Work on the Paradise scheme, which was originally known as Paradise Circus, began at the beginning of 2015 and has included demolishing John Madin’s 1970s Birmingham Central Library.