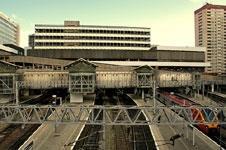 Birmingham has been given £15m to spend on a string of regeneration schemes as part of the council’s Big City Plan.

Speaking at Mipim, Mike Whitby, leader of Birmingham City Council, revealed how the £10m set aside by the council in its 2008/09 budget will be spent to develop the city centre. The remainder £5m will come from partner agencies.

Key projects include the £12m City Park, a new multi-storey car park in Eastside, and the redevelopment of Curzon Street Station and Digbeth Institute.

Part of the money will also be used to improve connectivity and street scenes for pedestrians travelling between the Jewellery Quarter, city centre and the Mailbox.

Cash will also be made available for the Interconnect Birmingham, a project that seeks to improve the legibility of signs and ease of pedestrian movement within the city.

Whitby said: "The Big City Plan sets ambitious targets for the future of the city, and we are consulting with as wide an audience as possible on to ensure we get this ‘once-in-a-lifetime’ opportunity right.

"However all the good work and ambitious development plans do not simply stop while this process is taking place."