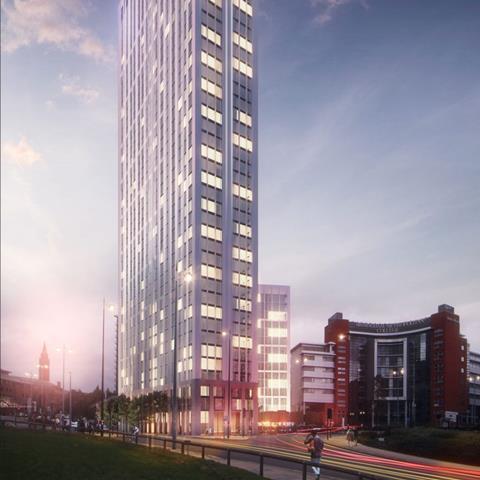 Glancy Nicholls is facing a judicial review of the decision to grant planning for its 51-storey residential tower in Birmingham.

The High Court ruled there are several grounds for challenging the consent including Birmingham council’s failure to tell its planning committee about objections from the Victorian Society. The amenity’s society’s views and expertise should not be “brushed aside”, said Mrs Justice Lang.

The £160m scheme, granted planning in December 2019, is for 667 build-to-rent flats, retail and leisure facilities in two towers of 51 and 15 storeys, replacing the old CEAC building on Jennens Road.

The site, just north-east of the city centre, is in a conservation area and close to listed Victorian and Edwardian buildings including the grade I Curzon Street Station, grade I Victoria Law Courts, and grade II* former Methodist Central Hall.

The scheme was due to start on site early next year and to complete in late 2022. No date has yet been fixed for the judicial review.

Tim Bridges, Victorian Society conservation adviser, said they were not opposed to the principle of redevelopment on the site but that the scale and height of the proposal would have a negative impact on the character and appearance of its neighbours.

One Eastside, for local developer Court Collaboration, is one of several tall towers the architect is currently working on in the city. It is also behind 61-storey 100 Broad Street, which will be Birmingham’s tallest.