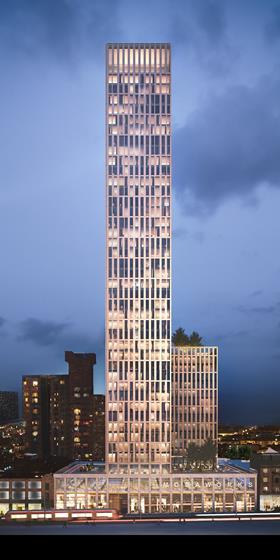 Developer Moda will build the skyscraper and manage it for residents, transforming the former Clicks nightclub into a 481-apartment scheme designed exclusively for rent. The architect is Birmingham-based Glenn Howells.

The £183m development, named 2one2 Broad Street, will house apartment sizes ranging from studios to three-beds, alongside amenity spaces spread across the building.

It will feature more than 30,000 ft2 of communal space including a residents’ lounge and health and wellness zone; 35,000 ft2 of retail and leisure space provided in a three-storey podium; and 200m running track that will sit outside in the podium roof, offering panoramic views of the Birmingham skyline.

“Renters have been poorly served by the housing market and the aim of build to rent is to change that by providing everything people need - from workspace to wellbeing – with a mix of community, security and great service.”

Plans for 2one2 Broad Street were initially submitted to the council at the end of September. Birmingham’s tallest tower is currnetly the 152m-high BT Tower, built in the 1960a.

Moda Living is backed by Apache Capital Partners and has a £1.5bn pipeline of 6,000 rent-only apartments in city centre sites across the UK. Other schemes are currently underway in Liverpool, Leeds, Manchester, Glasgow and Edinburgh.