Bookings down for Dubai's Cityscape event 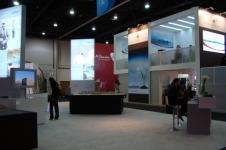 Signs are emerging of how the downturn in Dubai will hit its annual property mega convention Cityscape this October. Whereas hotel meeting rooms are usually block booked by this time of year by some of the event’s 60,000 delegates who need them to frantically clinch deals, this year bookings are severely down.

At the Novotel Wolrd Trade Centre, which adjoins the conference venue and has been a favourite place to thrash out deals, only one meeting room has been booked during the event, which is scheduled for 5-8 October. All eight rooms were booked this time last year, according to Novotel staff.

Nasline Iqbal, banqueting manager at the Novotel told ArabianBusiness.com business was down "big time" on last year. “Last year was one of the biggest exhibitions because property was booming. This time last year I had eight meeting rooms booked – everything was taken. Even the aerobics room was sold out,” she said.

The cost of renting a meeting room at the Novotel during Cityscape ranges from AED2,000 per day to AED8,000 per day. Iqbal said she was considering slashing rates by up to 25% in a bid to drum up bookings.

Cityscape Abu Dhabi, historically a smaller event, in April this year saw visitor numbers down 25% according to the conference organiser, with around 30,000 visitors.

Dubai’s property market started to enter a downturn towards the end of 2008 and now $300bn of building projects are on hold in the UAE, according to research firm Proleads.