Bouygues has been appointed to the first phase of a £350m housing development in the shadow of the upmarket residential job being built by Mace and Multiplex at Chelsea Barracks.

Work involves redeveloping the Ebury Bridge Estate on the Ebury Bridge Road under a masterplan drawn up by Arup and A Studio. The estate is one of the borough’s oldest with the majority of the buildings having been built in the 1930s. 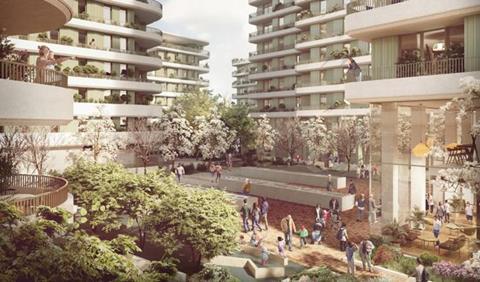 How the new scheme will look when completed

The development will sit across the road from the £1bn Chelsea Barracks scheme in west London which is being developed by Qatari Diar and will have 34 houses, 329 apartments and a 90-bedroom hotel. Mace and Multiplex are working on this scheme.

Westminster City Council, which appointed Bouygues, said work on the first phase with the first of an expected 758 homes due to start next year. The value of the first phase is thought to be around £100m.

The plan was granted planning by then London mayor Boris Johnson in 2015.