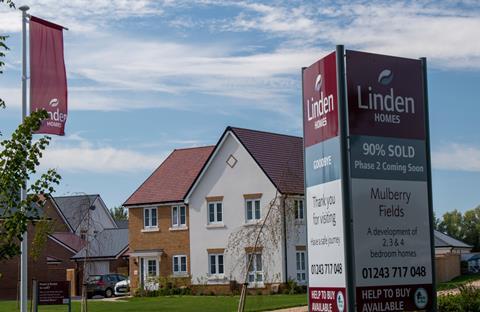 Galliford Try has agreed to sell its housing businesses to Bovis for £1.08bn, following nearly two months of intensive talks.

The firms announced this morning that the companies have agreed to a cash and shares deal which will see Galliford Try shareholders be offered a £675m stake in Bovis plus £300m in cash and a £100m debt swap.

The deal, which is expected to complete on 3 January 2020, will see Bovis buy the Linden Homes business plus Galliford Try’s lucrative housing partnerships division.

It requires the approval of both sets of shareholders to go ahead, and for Galliford to raise £675m from shareholders with the issuing of new equity.

The two firms announced they were in talks about a deal on September 10, and said today the combined Bovis and Linden Homes business would create a top five housebuilder producing 12,000 homes per year.

Greg Fitzgerald, Bovis Homes’ chief executive, who used to head up Galliford Try, said: “This is an exciting and transformational opportunity to create a leading UK housebuilder with an enhanced customer proposition and the ability to increase delivery to more than 12,000 new homes per year.”

The combination with Galliford Try Partnerships gives Bovis Homes a market leading position in the high growth, more resilient partnerships market, with significant potential to increase revenue and profit while delivering more affordable homes at a time when they are needed more than ever.