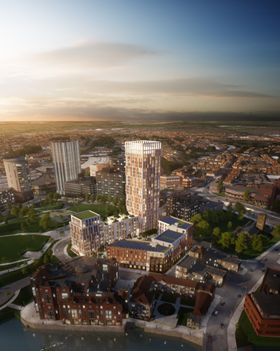 A residential development in Bristol, which would include the city’s tallest building, has been granted planning permission.

Linkcity - the international property development arm of Bouygues - is the contractor on the project, with Chapman Taylor, the architect behind the £1.4bn revamp of Brent Cross shopping centre, behind the design.

The Castle Park View project, on the site of a former ambulance station, will regenerate a brownfield site and see Bristol’s tallest building at 26-storeys and 10-storey tower block.

Another building will connect the two, with the plans also including a 420m2 convenience store.

It will provide 375 homes through a mixture private rented sector (PRS) and affordable housing. Car/bicycle spaces and leisure facilities are also included in the plans.

Chapman Taylor said the “strong built form” along the northern boundary will be reminiscent of the old castle wall which once stood on the site.

Earlier this month, the architect reported pre-tax profit had risen by a third to £3m in the year to June after slipping by the same margin in 2016, while turnover surged 19% to £36m.