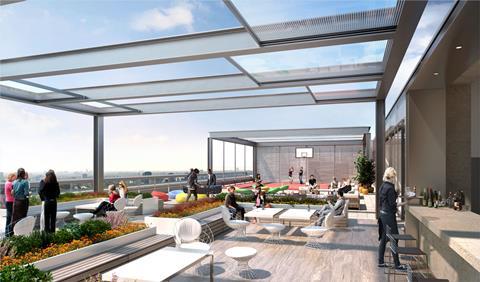 British Land has unveiled designs for what will be one of London’s highest basketball courts as part of the wellness and productivity boosting features at its latest office building in Paddington.

Working with architect Allies and Morrison British Land has developed the existing consent for 4 Kingdom Street to include the roof-top basketball court, a corner terrace on each floor and a “west pod” which creates a series of collaborative working areas outside of the main floorplate.

The building, being constructed by Wates, forms part of the developer’s 11-acre Paddington Central campus and upon completion in the first quarter of 2017 will house 147,323 sq. ft. of office space over nine floors.