Budget 2021 summary: What it means for construction

A national infrastructure bank, ongoing covid-19 support and a longer than expected stamp duty holiday extension were all among the headlines from today’s budget.

Speaking in the House of Commons this afternoon chancellor Rishi Sunak made several announcements that are sure to impact construction.

Here are some of the key measures that will affect construction businesses.

> Also read: Industry welcomes infrastructure bank but tells government to get on and build 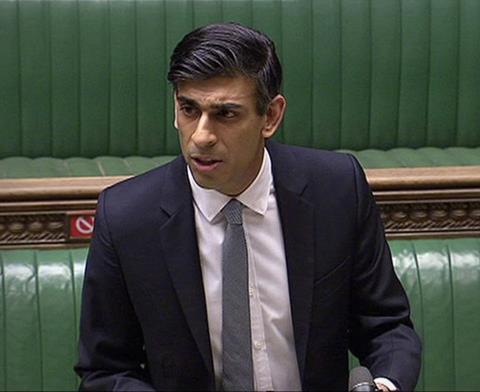 Sunak confirmed the furlough scheme will be extended until the end of September with no changes to the terms. Employees will continue to receive 80% of their salary for hours not worked until the scheme ends. Employers will be asked to contribute 10% of this amount from July and 20% from August. Sunak said the furlough extension was to “accommodate even the most cautious view about the time it might take to exit the restrictions”.

The chancellor also confirmed that the self-employed support scheme (SEISS) would continue, with a fourth grant up to the end of April and a fifth grant available from May. Self-employed people whose turnover has fallen by 30% will receive the full 80% SEISS grant, but self-employed people whose turnover has fallen by less than 30% will receive a 30% grant. The eligibility for the grant has also been increased, with up to an extra 600,000 people able to apply. This is because the government is now allowing workers to submit their 2019-2020 and 2020-2021 self-assessment tax returns as evidence of their earnings.

Sunak confirmed that the stamp duty holiday on house purchases under £500,000 will continue until the 30 June in England and Ireland. It had been due to end at 31 March. This means that nearly nine out of 10 people buying a new home currently pay no tamp duty at all. The Scottish and Welsh governments have received additional funding to provide similar support .

The chancellor said that in order “to smooth the transition back to normal” the nil-rate band will be £250,000 until the end of September, with the usual level of £125,000 returning on 1 October. Sunak also confirmed a new mortgage guarantee scheme, whereby a number of the UK’s largest lenders will be offering 95% mortgages from next month.

Sunak confirmed more details of the UK Infrastructure Bank - the country’s post-Brexit answer to the European Investment Bank. Coming into operation this spring the bank will have £12bn of equity and debt capital to finance local authority and private sector infrastructure projects across the UK. It will also be able to issue up to £10bn of guarantees. The hope is the Leeds-based institution will support at least £40bn of both private and public sector infrastructure projects across the UK. It is envisaged the bank will cost the exchequer £745m in 2021-22, with this increasing every year to 2025-26 when the cost is expected to be £1.79bn.

The new institution will offer a range of financing tools including debt, hybrid products, equity and guarantees to support private infrastructure projects and, from the summer, will offer loans to local authorities at a rate of gilts plus 60 basis points for strategic infrastructure projects. Sunak said the bank will be a driving force in the “green building revolution”, with budget documents confirming it will also establish an advisory function to help with the development and delivery of projects.

Its primary focus will be on the economic infrastructure sectors covered in the National Infrastructure Strategy, including clean energy, transport, digital, water and waste. In addition, it will be able to lend to university projects that generate a return to support regional and local growth. The bank will also be able to play a role in supporting and developing early-stage technologies. The government will publish a set of investment principles for the bank later in the spring to further help it what projects should be in scope. The bank will make independent investment decisions and will need to develop assessment criteria to decide which investments it will take forward in line with its objectives. This will include environmental impacts. In due course the bank will publish a document to set this out.

The government confirmed details of three new investment programmes targeted at supporting its levelling up agenda. These are the UK Community Renewal Fund, the Levelling Up Fund and the Community Ownership Fund. As confirmed in November’s spending review, the UK government has committed an initial £4bn for the Levelling Up Fund for England over the next four years (up to 2024-25) and set aside at least £800m for Scotland, Wales and Northern Ireland.

In England, Scotland and Wales, Levelling Up Fund cash will be delivered through local authorities. The Scottish and Welsh Territorial Offices will be consulted in the assessment of relevant bids. The fund will focus investment in projects that require up to £20m of funding. However, there is also scope for investing in larger high value transport projects. Bids above £20m and below £50m will be accepted for transport projects only. Local authorities can submit one bid for every MP whose constituency lies wholly within their boundary. Projects should also be aligned to and support net zero goals: for instance, be based on low or zero carbon best practice; adopt and support innovative clean tech and/or support the growth of green skills and sustainable supply chains. Part of the criteria for assesment will be based on an areas “level of need”, with the government also having published a list prioritising different areas.

The £150m Community Ownership Fund is intended to help ensure that communities across England, Scotland, Wales and Northern Ireland can support and continue benefiting from the local facilities, community assets and amenities.

The government also confirmed more than £1bn from the Towns Fund for a further 45 Town Deals across England and that it was accelerating investment in three City and Growth Deals in both Scotland and Wales. The deals are for Ayrshire, Argyll and Bute, and Falkirk, and Swansea Bay, North-Wales and Mid-Wales.

The government will has confirmed the location of eight new freeports in England, areas where businesses will benefit from more generous tax relief, simplified customs procedures and wider government support, bringing investment, trade and jobs which will regenerate these regions. They are: East Midlands Airport, Freeport East (Felixstowe and Harwich), Thames (Including Port of Tilbury and London Gateway Port), Liverpool City Region, Teeside, Solent, Plymouth & Devon and Teeside. Discussions are ongoing between the UK government and the devolved administrations to ensure the delivery of freeports in Scotland, Wales and Northern Ireland.

Policy in these areas that will support the construction sector includes an enhanced 10% rate of structures and buildings allowance for constructing or renovating non-residential structures and buildings for structures or buildings brought into use on or before 30 September 2026. There will also be a capital allowance of 100% for companies investing in plant and machinery for use in freeport tax sites, which will be available for the same five-year period. There will also be full relief from Stamp Duty Land Tax on land or property purchased and used for a qualifying commercial purpose. There will also be full business rates relief in freeport tax sites in England, once designated. Relief will be available to all new businesses, and certain existing businesses where they expand, until 30 September 2026. Relief will apply for five years from the point at which each beneficiary first receives relief.

From 1 April 2021 until 31 March 2023, companies investing in qualifying new plant and machinery assets will benefit from a 130% first-year capital allowance. This upfront super-deduction will allow companies to cut their tax bill by up to 25p for every £1 they invest. Investing companies will also benefit from a 50% first-year allowance for qualifying special rate (including long life) assets.

The government has also confirmed that it will commit £375m to introduce Future Fund: Breakthrough, a new direct co-investment product to support the scale up of the most innovative, R&D-intensive businesses. The British Business Bank will take equity in funding rounds of over £20m led by private investors to ensure these companies can access the capital they need. The government has said it will carry out a review of R&D tax reliefs, with a consultation published alongside the budget. This review will consider all elements of the two R&D tax relief schemes.

The Treasury has also announced support for the development of new solutions to cut carbon emissions and accelerate low-carbon energy innovations. These include the launch of a £20m programme to support the development of floating offshore wind technology across the UK and a new £68m UK-wide competition to implement several first-of-a-kind energy storage prototypes or technology demonstrators.

A taskforce designed to stimulate housebuilding using modern methods of construction and backed by £10m of government funding was also announced by Sunak today. The new taskforce will be established by the housing ministry, with £10m of “seed funding”, designed to “accelerate the delivery of MMC homes in the UK”. Budget documents said the body will “consist of world-leading experts from across government and industry” and be designed to “fast-track” the adoption of modern methods of construction. The new unit will be based in the MHCLG’s new office in Wolverhampton and will work closely with local authorities and metro mayors, including the West Midlands Combined Authority and the Liverpool City Region.

The government confirmed that it will extend and increase the payments made to employers in England who hire new apprentices. Employers who hire a new apprentice between 1 April 2021 and 30 September 2021 will receive £3,000 per new hire, compared with £1,500 per new apprentice hire (or £2,000 for those aged 24 and under) under the previous scheme. This is in addition to the existing £1,000 payment the government provides for all new 16-18 year-old apprentices and those aged under 25 with an Education, Health and Care Plan, where that applies. The government also announced the introduction of a £7m fund from July 2021 to help employers in England set up and expand portable apprenticeships. This will enable people who need to work across multiple projects with different employers.

At the other end of the spectrum, and of equal significance to the sector, the government said it had plans to make several changes to its highly skilled migration policy. It said it would modernise the immigration sponsorship system to make it easier to use and that the government would publish a delivery roadmap in the summer. The budget papers also said the government would also introduce, by March 2022, an elite points-based visa.

A new Help to Grow scheme, which will help thousands of SMEs get “world class” management training according to Sunak, has also been confirmed. He said that UK business schools would offer a new “executive development” programme, with the government paying 90% of the cost. Developed in partnership with industry, the programme will combine a national curriculum delivered through business schools with practical case studies and mentoring from experienced business professionals. The programmes will run for 12 weeks.

Importantly for construction, where a majority of the supply chain is made up of SMEs, there will also be support for small businesses looking to develop digital skills with free training and a 50% discount on new “productivity enhancing software” worth up to £5,000 each. This scheme will be launched in the autumn.

The chancellor also confirmed that corporation tax paid on profits increased to 25% in April 2023, saying it was “fair and necessary” to ask businesses to contribute to the economic recovery. While this figure was higher than expected, with an increase from the current 19% to 23% having been trailed, Sunak said the UK would still have the lowest corporation tax rate in the G7 after the change. The chancellor added that only 10% of companies would have to pay the full 25% on profits, with the tax targeted towards larger, more profitable firms.