Builder puts wife up for sale 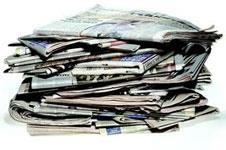 A builder has put his wife up for sale by taking out an advertising space in a magazine.

Gary Bates, a self-employed builder from Gloucester, took out an advert in Trade-It magazine offering his wife Donna up to the highest bidder and is understood to have received nine or 10 enquires from interested readers as a result.

The advert appeared in the magazine's "free to collect" section alongside some of Gary's fishing tackle. Donna was not available to comment but her husband has told the local press that she has “seen the funny side” now.