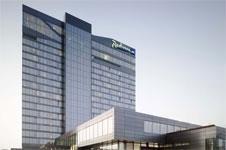 Buro Happold worked with Georgia-based engineers to strengthen the existing concrete structure of the hotel and an adjacent new two-storey building to meet international seismic standards, as required by the city’s volatile geology.

The new-look hotel now has 249 rooms, restaurants, bars and a conference centre. Its old roof top swimming pool has been removed and replaced with a split-level spa and fitness centre and a casino, ballroom and restaurant have been housed in the new building next to the existing hotel.

The Iveria has had a colourful past. Built in the cold war of the sixties as the Interhotel, it offered some of the finest accommodation to be in Tbilisi. But the hotel fell in to disrepair and during the nineties it was occupied by 800 refugees fleeing the conflict of the Abkhazia war that followed the collapse of the USSR. They colonised the building and, to create more living space, erected facades to weather proof the balconies using a variety of materials including cardboard. The refugees were gradually re-housed, opening the possibility of restoring the building to its original use.