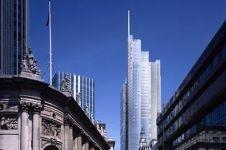 Administrator for Allerton, which went bust last week, says there has been interest in its bridges and engineering arms

Potential buyers are eyeing up parts of the Heron tower’s steel contractor, Allerton, after it went into administration last week.

Hunter Kelly of Ernst & Young said there had already been interest from the market in Allerton Bridges and Allerton Engineering, which he will try to sell as a going concern.

He said: “The underlying businesses of Allerton Engineering and Allerton Bridges are profitable with strong order books and highly skilled workforces. These businesses are continuing to trade while we pursue their sale. We have already received expressions of interest from potential purchasers and are hopeful of achieving a successful outcome.”

The firm is best known for its involvement with Skanska’s £242m Heron Tower in London. Other projects have included the redevelopment of Landsdowne Road stadium in Dublin.