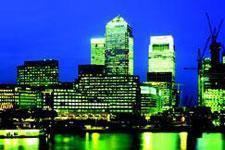 The company that owns the Canary Wharf estate has said it is at risk of breaching its bank covenants this year if property values continue to fall.

Announcing annual results the firm said it expected to meet its next covenant test, due on May 15, but that there was “a material risk that the company may subsequently be in breach of its financial covenants within the next 12 months.”

An £880m loan is due to be repaid in May 2010 and the firm said it would have to be re-financed. The re-pricing of the company's property assets follows the steepening global downturn, in particular the collapse of Lehman Bros bank, which holds 1 million ft² of office space on the estate. Songbird said the offices were still being fully let by the administrators and rent had been guaranteed for four more years.

The statement said: “It is clear the current financial market turmoil has had a significant impact on the UK real estate sector, in particular on property asset values. The Central London office market, of which Canary Wharf Group is an integral part, has felt the severe effects of the global financial downturn.