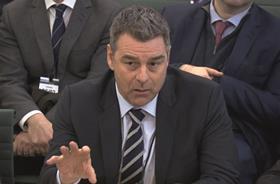 The former Carillion chief executive blasted by MPs yesterday for his role in the firm’s collapse has been in touch with the boss of a London management reputation firm, Building can reveal.

A 100-page report into Carillion’s implosion laid the blame for the firm going bust at the door of the firm’s directors, singling out Richard Howson, chief executive for five years until 2017, for particular blame.

Paul Blanchard, a former Labour councillor in York, said Howson was a personal friend and had “been through a lot”.

He added: “I have not been hired by Richard, now or at any time in the past. I have not offered him any professional advice and have only ever spoken to him as a friend. He’s been through a lot and I wish him well.”

Blanchard is managing director of Right Angles, a PR firm based in London’s Soho, and which describes itself as a “boutique public relations and reputation management practice”.

Set up last year, its website says Blanchard “takes charge of our crisis work” and on his own website Blanchard describes himself as a “PR consigliere, working exclusively with CEOs and global thought leaders, building and managing their reputation”.

MPs said Howson had demonstrated “misguidedly self-assured leadership” and had “little grasp of the unsustainability of Carillion’s business model or the basic failings of governance that lay at the root of its problems”.

The report added: “He even seemed surprised to have been removed as chief executive following the [July 2017] profit warning.”