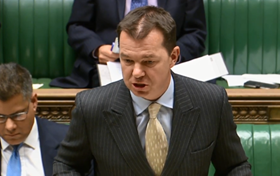 Carillion directors look unlikely to face criminal prosecution for the actions that led to a £800m pension deficit, according to the junior minister for work and pensions.

Answering questions in the House of Commons yesterday, Guy Opperman told MPs it was unlikely changes to legislation laid out in the Department for Work and Pensions Defined Benefits White Paper earlier this year, which proposes criminal charges for directors who neglect their duties, would be applied to Carillion’s directors.

The statement came in answer to questions from shadow minister for work and pensions Jack Dromey who asked: “The DB White Paper proposes criminal charges for directors who neglect their duties. Can I ask the minister, would Carillion directors go to jail under the proposed changes to the law and if not, why not?”

Opperman (pictured) responded: “I obviously look forward to working with him [Dromey] as we navigate the DB White Paper into legislation in the future. But I have to say that clearly it is a matter of the future that the legislation is looking at, not necessarily retrospectively.”

Dromey took the government to task over its “failure to act” in the lead up to Carillion’s collapse, saying: “The secretary of state said the Pensions Regulator had concerns in 2014 about Carillion pension scheme deficits but failed to act.

“The government went on letting contracts to Carillion despite repeated profit warnings and failed to act. Does the government recognise that the consequences of that failure to act now is the biggest ever hit on the pensions protection fund of £800m and many thousands of pensioners losing out on their pensions?”

In response, Opperman said: “I think we can all agree there are lessons that can be learnt from Carillion and other recent high profile cases.

“However, there are two options in this case, trying to discredit an organisation and run it down, or, and this is my choice, support the regulator, give them the further powers from the DB White Paper that we set out in detail and stress that the vast majority of employers do right by their employees.”

Last week the findings from a joint parliamentary committee inquiry into Carillion’s collapse slammed both the Pensions Regulator and the Financial Reporting Council.

The inquiry said the Pensions Regulator had a “feeble response to the underfunding of Carillion’s pension schemes” and “failed in all its objectives regarding the Carillion pension scheme”, while “the FRC was far too passive in relation to Carillion’s financial reporting”.

While saying government must act to give the regulators more powers, the inquiry found there was a lack of proactivity from both the Pensions Regulator and the FRC.

The 100-page report on the findings said: “Chronically passive, they do not seek to influence corporate decision-making with the realistic threat of intervention. Action is part of their brief. They require cultural change as well.”

The MPs, from the business and work and pensions committees, said they had “no faith” in the regulators due to their failure to act in the lead up to the contractor’s collapse.