‘Carillion effect’ takes toll as banks shy away from lending 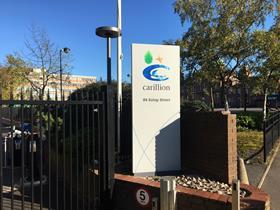 Contractors have again been warned that nervous banks are pulling down the shutters on lending to the industry in the wake of Carillion’s collapse last year.

Last month, Ian Marson, the UK head of construction at EY, said the volume of profit warnings since the beginning of the year is expected to push the 2019 figure beyond levels not seen since the last recession.

And his colleague Mike McCartney, EY’s director of capital and debt advisory, said: “Carillion was a catastrophic moment in shattering lender or institutional confidence in the sector – there’s no other way of looking at it.”

McCartney said many banks are making it clear they do not want to be writing new business with construction firms.

Marson said banks have not completely pulled the plug on the sector but admitted: “It’s terrible is the best way of describing it. Banks have zero optimism bias [towards construction] right now.”

Last week, Costain said pre-tax profit more than halved in the six months to June because of a legacy scheme it completed more than a decade ago.

The boss of one listed contractor admitted banks were willing to lend “but only to firms with good balance sheets”.

In its last set of results, the country’s biggest builder, Balfour Beatty, highlighted its “sector-leading” balance sheet with net cash at the half year increasing to £425m and average net cash for the first six months at £290m.

It said this would rise to between £280m to £300m at the year end, an average £50m higher than its previous estimate.

Balfour Beatty chief executive Leo Quinn said some firms had taken on too much debt in order to fuel growth.

“The problem this industry has had is forced growth,” he said, when announcing an improved set of half-year results earlier this month.

Galliford Try and Kier, who have both issued profit warnings this year and embarked on a cost-cutting programmes, are due to announce their full year results next month.