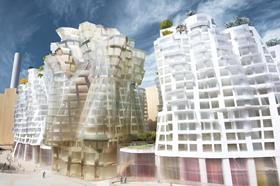 Carillion has been tipped to take over from Bouygues on the £1bn third phase of the redevelopment of Battersea Power Station.

Building revealed this morning that Bouygues is set to be replaced on the Frank Gehry and Foster-designed phase after the French contractor and the client Battersea Power Station Development Company (BPSDC) mutually agreed to part ways after the pre-construction phase.

A source close to the project said Carillion was in line for the work. Another said: “There is a logic to it in a sense that Bouygues have a work-out period and Carillion haven’t finished phase one yet.”

Commenting on Bouygues’ potential replacement, BPSDC said: “Battersea Power Station is in advanced discussions with a number of leading contractors, and we are not going to confirm or deny the inclusion of any party, as no decision has yet been made.” Carillion declined to comment.

Carillion is already working on the £400m Ian Simpson and dRMM-designed first phase, after being appointed back in May 2013.

Malaysian investors Sime Darby, SP Setia and The Employees Provident Fund own the scheme, which is managed by the BPSDC.