Further details of a Treasury plan to allow larger contractors access to cheaper capital so they can keep going in the wake of the coronavirus crisis are set to be announced by the Bank of England later.

The move will effectively free up banks to lend to smaller and mid-market firms by expanding the capacity of the banking system. 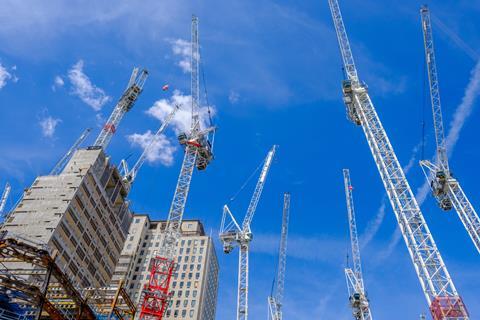 Chancellor Rishi Sunak has set up a Covid-19 Corporate Financing Facility (CCFF) to support firms who have been hit by a funding squeeze.

EY head of construction Ian Marson said: “It will make a difference to the broader market and help focus banks’ efforts on SMEs and mid-market firms. Cash burn is a big issue for the bigger contractors because they don’t have big cash resources.”

Further details of how it will work in practice will be released shortly but the Bank of England will run it and its new governor Andrew Bailey said it will “support [firms] in paying salaries, rents and suppliers, even while experiencing severe disruption to cashflows”.

He added those set to benefit will be “non-financial companies that make a material contribution to the UK economy and that had, prior to being affected by Covid-19, a short or long-term rating of investment grade, or financial health equivalent to an investment grade rating”.

The qualifying rating grade is expected to be BBB- but details of how larger contractors which don’t have that rating can access finance are expected to be published later.

Sunak said: “This will act as a vehicle to support corporates who would ordinarily seek market-based finance for their working capital but find themselves unable to access financial markets in this uncertain operating environment.

“This facility will primarily provide bridging support to see through the temporary nature of Covid-19 related disruption, by catalysing the market for commercial paper in both primary and secondary markets. It will stand ready to offer unlimited financing to eligible companies over the coming year.”

In a letter to new Bank of England governor Andrew Bailey, Sunak said the Bank will operate the scheme and Sunak added: “The Bank will put in place the facility as soon as possible, using robust and transparent criteria to design and deliver financing support.

However, I recognise that, for as long as the magnitude of the economic shock remains uncertain, lending to businesses of any size will carry material risk. I am therefore prepared to indemnify the Bank’s operations under this facility such that the Bank does not bear any losses associated with the operation of the CCFF.”

The Bank said it will put the initiative into place as soon as possible and will be publishing an update later today.

It will be set up as a separate entity from the Bank and will be funded by issuing addition central bank reserves.