Centre Point's £55m penthouse to go on sale in September

Multiplex due to complete work overhauling 1960s landmark by the autumn

Almacantar is expected to begin marketing its £55m penthouse at the top of the Centre Point tower this September.

Main contractor Multiplex still has 300 people working on site with work expected to be wrapped up by early autumn.

Around 50 people are currently carrying out work on the duplex penthouse, which comes with its own 360 degrees terrace, ahead of fit out work beginning early next month.

The developer is hoping to have the 7,220 sq ft penthouse, which is being built in the tower’s old plant room with the cost working out at £7,600 per sq ft, to be ready in time for the start of London Fashion Week which begins on 15 September.

Multiplex has been on site at the central London 1960s landmark, designed by Richard Seifert, since 2015 but work is now coming to an end with hoists and site hoardings due to come down in the coming months.

A spokesperson for the developer said 50% of the 82 flats have already been sold with half of the buyers coming from the UK. The first residents have moved in with four apartments now occupied.

Prices for a one bed flat start at £1.8m, with two beds going for £3.5m and three beds starting at £7.5m. The two floors below the penthouse have been given over in their entirety to one flat each.

Conran & Partners has carried out work on the interiors and tower masterplan while Rick Mather Architects, now called Mica, has worked on the public realm, infrastructure and a number of low-rise buildings at the scheme which includes six restaurant units and 13 affordable housing units in a neighbouring building called White Lion House. 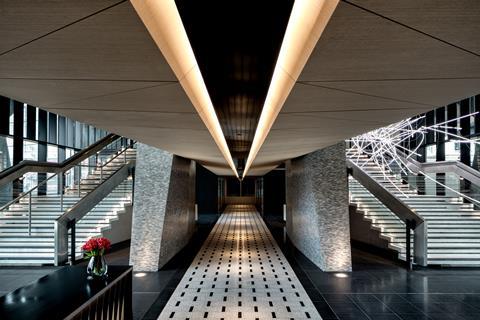 The lobby area of the revamped Centre Point tower