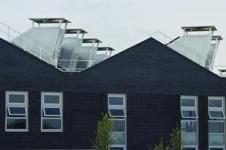 Fresh allegations in the Guardian, which is conducting an investigation into the Prince’s activity on modern architecture, claim that the heir to the throne took against preliminary designs for the £14.5m building.

A royal aide reportedly told the National Trust that the Prince said he might withdraw his patronage of the organisation unless the designs were changed.

The warning came shortly after the Prince took over the presidency of the charity following the Queen Mother’s death in 2002.

Clarence House told the newspaper that the argument was over the sustainable principles of the building. A spokesperson said: “The prince won’t offer his personal patronage of a building that doesn’t feature the principles of sustainability he personally espouses.”

The building, designed by Feilden Clegg Bradley, was eventually completed in 2008 and given a BREEAM Excellent rating.