Chelsea gives new stadium red card out of the blue 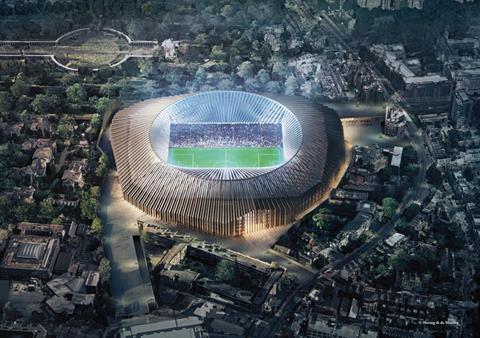 The planned stadium, designed by Swiss architect Herzog & de Meuron, the practice behind the main stadium of the 2008 Olympic Games in Beijing, has been in the pipeline for years.

Plans were formally unveiled in December 2015 to increase capacity of the ground from its current 41,600 to 60,000 putting it on a par with Arsenal’s ground and the new one being built by Mace for Tottenham Hotspur.

But in a statement the Premier League club said it had now put its new stadium project on hold. “No further pre-construction design and planning work will occur,” it added.

Chelsea said it did not know when it might reconsider its decision, which it said was made “due to the current unfavourable investment climate”.

Last month Building revealed VolkerFitzpatrick was preferred contractor for the first major package of works on the job – the £95m enabling works contract which is centred on rail works.

It was to have included piling and diversion works and would have seen decking platforms built over the District line to the north west of the stadium and a mainline railway used by Southern trains to the east.

And a demolition contractor to tear down the existing ground was due to have been appointed this summer.

Other firms being linked with jobs on the scheme included steelwork contractor Severfield, currently working on Spurs’ new ground, while Lendlease, Sir Robert McAlpine, Mace and Multiplex were all understood to have been sounded out about the main contractor role.

The wider project team for the job includes Arcadis as cost manager, WSP as transport consultant with the firm also providing engineering services along with German structural engineer Schlaich Bergermann which has worked on stadia at the last three World Cups.

The club’s announcement comes days after owner Roman Abramovich became an Israeli citizen a month after the UK delayed renewing his visa for this country.

The new stadium was meant to be completed in time for the 2021/22 season, with planning approval secured from Hammersmith & Fulham council in January.