Second phase of railway could see involvement from China

Chinese contractors are unlikely to get a foothold into the HS2 project for at least five years after the government made clear that it had not spoken to the Beijing firm that wants to build the route for a fraction of its current cost.

Last week Building revealed that China Railway Construction Corporation (CRCC) had written to HS2 chief executive Mark Thurston to say that the line could be built for closer to its £56bn budget and within five years. Grant Shapps, the transport secretary, said talks were limited to CRCC and HS2 but admitted: “I’m keen to learn from anybody and the Chinese build these things fast.”

He added: “I really want to get this thing built faster if it’s possible, so we would be fools not to have a conversation.” 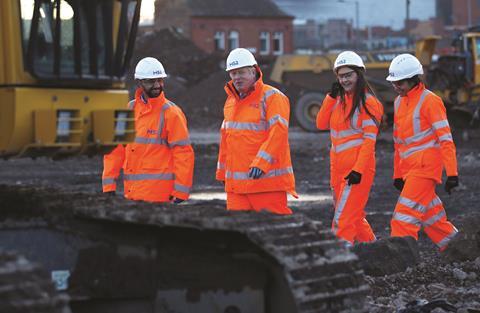 Until now, Chinese interest in the scheme has been limited. A former senior HS2 executive told Building: “They certainly discussed the manufacture of rolling stock but not the construction when I was there.”

Should the government consider the Chinese offer to build #HS2?

Building understands that a Chinese firm could be involved in the next phase of the job, when the route heads from the West Midlands to Leeds and from Crewe to Manchester. “In terms of Chinese involvement, it would appear to be some way away,” a senior source said. “The earliest would be phase 2 – and that’s five years away.”

Firms have been appointed for the main civil engineering works along the first phase from London to Birmingham. Alasdair Reisner, chief executive of the Civil Engineering Contractors Association, said it was “unlikely” that HS2 would tear up its contracts for phase 1 at this late stage but “future high-speed rail work in the north of England may potentially offer opportunities for Chinese contractors to work with UK counterparts”.

News of CRCC’s offer has raised speculation that a Chinese firm might swoop on a UK contractor. Balfour Beatty and Laing O’Rourke are both said to have been a target.

CRCC has been one of the main players behind the construction of China’s 25,000km network of high-speed rail lines and the senior source said: “China will bring technical knowledge. What they won’t bring is knowledge and experience of how to operate in the UK. You do that by going into joint venture – or buying a firm.”

China’s potential involvement has put UK firms on notice that offers could be made to joint venture with them. But a source at one contractor said: “I think British firms will be wary about partnering with the Chinese. Intellectual property is a big issue. We could JV then, for the next job, find ourselves in competition with them.”

The next stage of the HS2 project involves the government giving the railway permission to start work on the ground. The green light is expected this spring.