Chinese firm offers to build HS2 and save ‘tens of billions’

CRCC will work with UK government ‘if necessary’

A Chinese firm that is one of the world’s largest contractors has offered to save the government “tens of billions” of pounds by taking on the HS2 project and building it within five years, Building understands.

The firm, part of China Railway Construction Corporation, has raised the prospect of the line reaching speeds of up to 420km/h, versus the maximum 340km/h currently envisaged, increased passenger capacity as well as delivering the scheme closer to its current £56bn budget.

China Railway Construction Corporation, known as CRCC, is a part state-owned and publicly listed Chinese contractor with a turnover in 2018 of more than £80bn, operating in 121 countries.

CRCC has been one of the main players behind the construction of China’s 25,000km network of high-speed rail lines, which account for around two-thirds of the world’s total length.

The offer comes in the week that HS2 finally got the official government go-ahead, despite the Oakervee review of the project suggesting the budget has risen from £56bn to £106bn, with construction due to take at least 15 years.

In a letter sent at the end of last month to HS2 chief executive Mark Thurston seen by Building, a CRCC division named 16th Bureau Ltd confirmed that it was prepared to make a “turnkey” offer to build the whole project within five years for a fixed price “significantly lower than the projections we have seen”.

The letter, signed by a CRCC representative, said it was also offering to deliver 420kph line speeds with “shortened journey times and increased capacity” adding that it would fund “up to 80% of the project value.

But, according to a source with knowledge of the offer, the firm was told by Thurston late last year that phase 1 of the project was too far advanced to consider alternative approaches and that it should instead consider going into a joint venture with UK contractors if it wanted to work on the job.

Apparently responding to this, the CRCC letter added: “We are happy to work with HS2 and, if necessary, the British government, to find a way to make this work. The advantages are, in our opinion, too great to dismiss on the basis that there are obstacles to overcome.”

It asks for HS2 to raise the matter with Grant Shapps, the transport secretary, adding that “whilst we appreciate your protocols, we respectfully encourage discussion as to how we can start to narrow the distance between us”.

It added: “We welcome the potential for working with your Tier 1 contractors and we are keen to find a JV partner.” 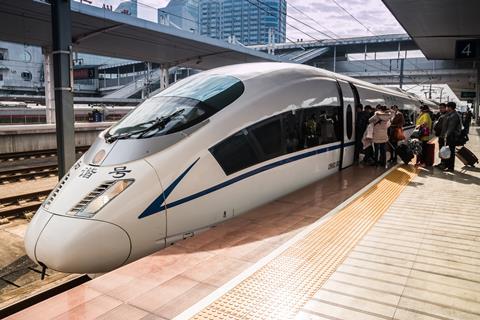 China has 25,000km of high-speed lines running across the country

Last April, HS2 admitted that Thurston had met with representatives of the Chinese rail industry in Beijing amid speculation that Chinese firms were keen to win work on the project. But, according to the source, this specific recent offer has been drawn up separately since that original meeting.

The source said the exact price could only be determined after detailed discussions but “the Chinese have a figure in mind that is nearer to the original budget”. He said the firm would cut costs on the project by “tens of billions of pounds”.

The source said such rapid construction could be achieved partly by bringing in automated processes from CRCC’s high-speed track laying experience and spending at a much higher rate, thereby allowing construction to commence in numerous locations simultaneously.

CRCC is also understood to have written directly to Shapps but received no reply.

The offer comes amid increasing controversy regarding the involvement of Chinese firms in UK infrastructure, with prime minister Boris Johnson reportedly berated by US president Donald Trump in a phone call last week over his decision to allow Chinese telecoms firm Huawei to bid for work on the UK’s 5G phone network.

Both HS2 and the Department for Transport were contacted for comment but did not respond by the time of going to press. 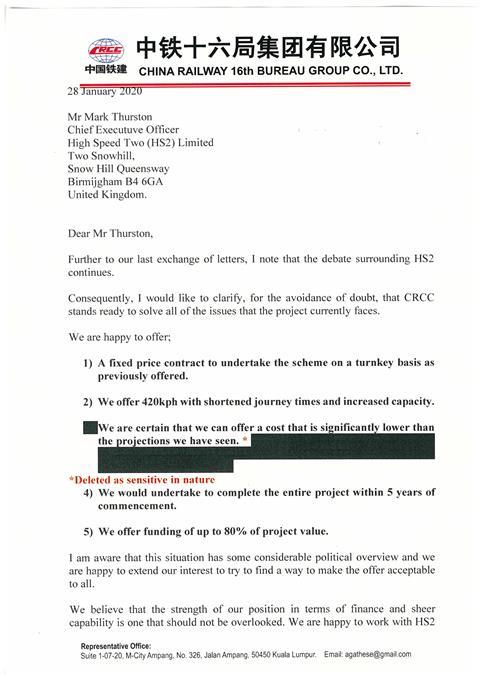 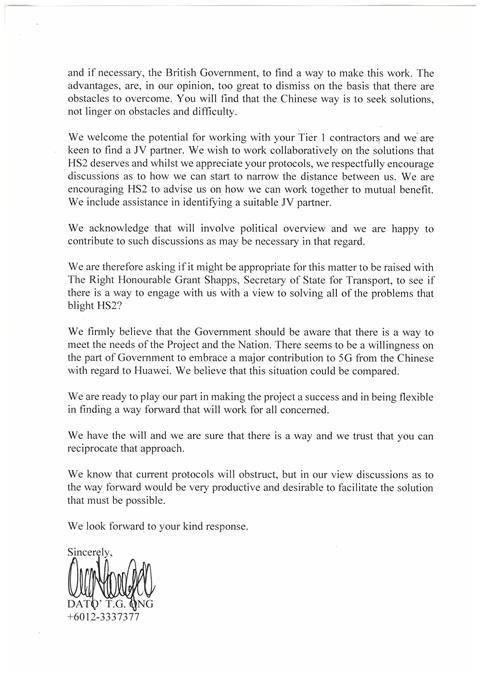