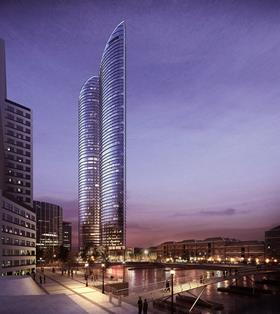 The tower, if approved, will be the tallest residential building in western Europe at 241m and would provide 869 homes, community space and shops at ground level.

Designed by HOK architects the building will provide one to three bed apartments, some of which will be affordable, on a site that has had permission for a tall building for over a decade.

Setareh Neshati, senior planning manager at Greenland said: “Greenland is excited to have submitted plans for this residential-led scheme which will deliver 869 new private and affordable homes.

WSP Parsons Brinckerhoff are the engineers on the project, Aecom is the project manager and the landscaping is being done by Gillespies.