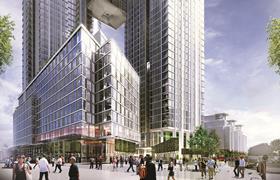 The Nine Elms area will be the new home to the US embassy, and a slew of schemes are already under way with Dalian Wanda choosing an Interserve and China State Construction Engineering Corporation (CSCEC) joint venture to deliver its scheme, designed by architect KPF, last April.

But Building understands the developer is now looking at its options after slow progress on the scheme, which is scheduled to finish in 2018, and is deciding whether to hire another contractor.

The joint venture - trading as CI-ONE - surprised the market when it pipped rival shortlisted bidders Mace and a separate CSCEC joint venture with Atkins for the job. Dalian Wanda’s development director Peter

Amato left a month later, in a move Building revealed was understood partly to be prompted by the decision not to pick Mace for the job.

One source said: “It’s a poorly kept secret that they’re considering other contractors.”

Another source said Interserve had flown out to Beijing recently to discuss terms but added: “Things are moving more slowly than anticipated. There’s a likelihood that they [the client] may go back to the market.”

An Interserve spokesperson said: “We continue to work with our JV partner and the client towards delivering this project.”

A spokesperson for Wanda One, Dalian Wanda’s UK trading company, said: “We are continuing to negotiate with the CI-ONE joint venture for the construction of City Tower and River Tower at the One Nine Elms development. We have no further comment at this time.”

One Nine Elms comprises a pair of towers at 45 and 60 storeys in height, incorporating 439 homes and a five-star hotel.

The scheme would be a debut UK project for CSCEC, the world’s largest global contractor, giving it a foothold in the UK market for the first time.