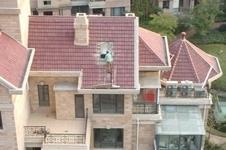 Property prices fell in 70 Chinese cities in December for the first time since 2005, according to government sources.

Planning agency the National Development and Reform Commission said house values have slipped by 0.4% on the same period last year.

The news comes as it emerged that China's economy expanded at the slowest pace for seven years in the final quarter of 2008.

In the last three months of the year, gross domestic product was up 6.8% on the same period in 2007, a significant drop from the 9% annual growth rate in the previous quarter, the statistics bureau said.

Bureau head Ma Jianting said: “The international financial crisis is deepening and spreading with a continuing negative impact on the domestic economy.”

Chinese premier Wen Jiabao said the outlook for jobs is “grim” and that the government will strive to reverse the slowdown in an attempt to maintain social stability. Public order is seen as a top concern for the authorities following riots by unemployed factory workers in Guangzhou last November.