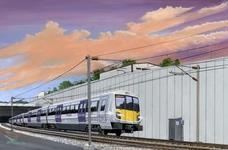 The City of London Corporation has at last signed up to contribute at least £250m to the construction of Crossrail, the £16bn proposed east-west rail link across the capital, two months after the original deadline.

The Corporation said it will pay £200m directly to the project, and ask city businesses for a further £150m. It has promised to underwrite at least £50m of this contribution if it is not forthcoming.

This follows an agreement reached last month with the British Airports Authority to contribute £230m. According to the heads of terms agreed between the agencies funding Crossrail - including the Department for Transport, Network Rail and the Greater London Authority - these agreements were supposed to be not later than the end of September this year, leading to speculation the DfT was having trouble forcing the City and BAA to honour their funding pledges in the tough economic climate.

The GLA said it now had all the “core” finance agreements in place to push ahead with the project, and launched a consultation on how to use further contributions from developers to fund part of the project. Under the heads of terms, a developer planning charge is required to raise a further £300m towards the cost of the project.

It also needs to raise £3.5bn through a supplementary charge on business rates in the capital, which requires new primary legislation to be introduced before it can be enforced. This was outlined in the Queen's Speech yesterday, but is facing major opposition from businesses concerned extra charges will just compound the current downturn.

The GLA said the delivery of Crossrail will provide a boost of at least £20 billion to the UK economy and generate an extra 30,000 jobs, with construction starting in 2010. It said it will also deliver a 10% increase to the capital's rail capacity on opening, earmarked for 2017.

Transport Minister Andrew Adonis said the signing of the agreements was a “landmark moment” in the delivery of Crossrail.

Sir Michael Snyder of the City of London Corporation said: “Crossrail is critical to the future of London's economy and it is essential that we continue to make major improvements to our transport infrastructure during these challenging times. Crossrail is absolutely crucial in keeping London and the UK globally competitive.”

The Crossrail Bill received Royal Assent on 22 July 2008, confirming the line will run 118 km from Maidenhead and Heathrow in the west, through twin-bore 21 km tunnels under central London, connecting London stations including Paddington, Bond Street, Tottenham Court Road, Liverpool Street and Canary Wharf and on to Abbey Wood and Shenfield in the East.

When complete, the railway will operate 24 trains per hour in each direction through central London during peak times. This will provide extra passenger capacity and relieve the Central and Piccadilly lines.