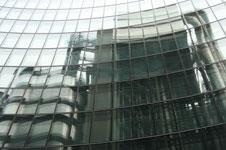 City workers in London had a lucky escape on Tuesday after a pane of glass fell 17 storeys from an office block building.

The 28-storey 125 Old Broad Street was only completed last year during an £80m refurbishment of the former Stock Exchange Tower. It was built by Bovis Land Lease and a new facade was designed by Grimshaw.

The 4m-wide panel of glass fell from a window and narrowly missed workers on their lunch break walking in the street below.