Firms need to fairly share supplies to avoid smaller firms being hit the most, group warns

The Construction Leadership Council is asking the industry to take a fair approach to materials distribution in the wake of worsening shortages – suggesting rationing to make sure smaller firms get their fair share of dwindling supplies.

In its latest product availability update, the group warned materials shortages had intensified in the past two months. 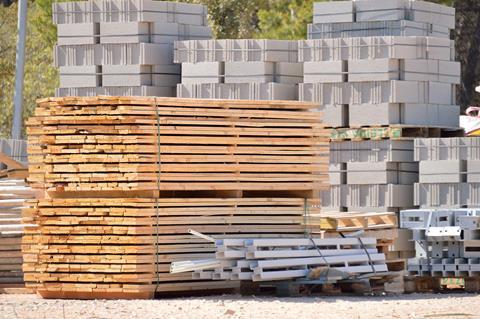 The CLC said: “Back in March we warned that product availability would worsen before it improved. This is proving to be the case; projections indicate that strong demand will continue over the next six months.

“This mirrors similar projections worldwide, as major economies such as China, the US and the EU surge following lockdowns.”

It said smaller firms were being particularly hit and added: “The surge in demand means some SME builders are not able to purchase essential materials, like timber, cement and roof tiles, as readily off the shelves. This not only impacts their ability to complete projects but also the cash flow of their business.”

It said given the impact on smaller firms “wherever possible the industry must work collaboratively to manage this unprecedented situation”.

The CLC added: “Any allocation systems should be as transparent as possible so all customers can be seen to be treated fairly. Customers should not over-order unnecessarily, while manufacturers should not promise delivery dates that cannot be achieved, only to cancel at short notice.

“Where relevant, the production for major projects – which is typically scheduled well in advance – should not be seen to adversely affect volumes available for smaller, regular customers.”

Mace chief executive Mark Reynolds admitted bigger contractors had yet to be hit by the impact. “I do think the biggest challenge that we face is how the materials shortage, which is particularly affecting RMI at this stage, is going to begin to affect housebuilders probably first, and then major construction.

“At Mace we can't see the impact at the moment. The information that we share when looking at procurement isn't showing any significant issue around material supplies affecting us, apart from anything that has silicon chips.

“We have received some odd things around, believe it or not TV monitors and things like that not being available or being delayed because of the silicon chip shortage. But that's a new thing that's only coming about in the last few weeks.”

The CLC said most of the shortages of products and raw materials impacting the market have been driven by both global and domestic supply and demand factors.

It said while previously reported issues relating to timber, steel, pitched roofing, plastics and paints were continuing, there were growing concerns around electronic components and bagged cement.

It also said that in addition to availability and resulting longer lead times, there was an impact on prices, with the Office for National Statistics projecting a rise of 7-8% in prices, with increases for certain materials, such as timber, expected to more than double during the year.

The CLC added that new rules on hauliers have exacerbated the shortage of drivers in the UK, adding to delays and lead times in both construction and other sectors as well.

The boom in construction following the easing of the latest lockdown restrictions was underlined in the latest annual results from tool hire firm Speedy Hire which said that revenue in April and May this year was up 2% on the equivalent period in 2019.

The firm said it claimed £8.9m from the government's Coronavirus Job Retention Scheme after furloughing half of its 4,000 staff last April during the first lockdown. It added that it made 200 people redundant during the year.