Bam has replaced Sir Robert McAlpine on a £260m conference and events development in Gateshead two years after McAlpine originally won the deal.

Building understands the client was left unimpressed with the proposals McAlpine had come up with to build the scheme whose completion date has already slipped back from a planned 2023 finish into the following year.

Bam originally came second in the race for the Gateshead Quays job which is being developed by Gateshead council in partnership with Ask Real Estate and German real estate investor Patrizia. 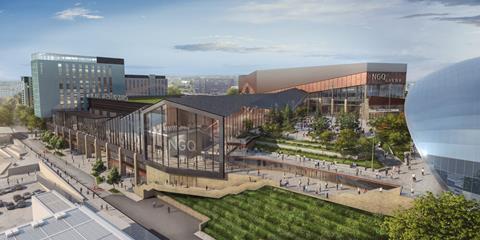 The arena is now expected to open in 2024

Speaking about the decision to ditch McAlpine, one insider said: “There were lots of things not being addressed – how they were going to build it, getting in touch with the supply chain, the social impact of the scheme.”

In a statement, Sir Robert McAlpine said: “[We] can confirm that our role in [the] Gateshead Quays development has now come to an end. Our focus is always on the value we bring to our clients and maintaining rigorous standards on quality. The team wishes our client and the incoming contractor well for the next phase of this project.”

Bam, which is building a £250m arena in the shadow of Manchester City’s Etihad stadium, has previously worked with Ask on an office building in Manchester while it was drafted in to replace bust Carillion on another Ask job in the city more than three years ago – a £40m office block called 100 Embankment.

The contractor is currently working on an Ask job in the middle of Newcastle, a £25m scheme to build a new head office for housing association Home Group which is due to finish next summer.

The 80,000 sq ft Gateshead Quays scheme at the town’s quayside, which will include a 12,500-capacity arena, conference and exhibition centre, was given the green light at the end of last year.

It will be built near the town’s Millennium Bridge, designed by Wilkinson Eyre and which won the Stirling prize in 2002.

HOK is designing the overall masterplan for the site, while AHR Architects is behind the hotel.