Design consultants are lodging bids for a competition to design a £4bn metro system in Cambridgeshire.

The project will see a network of metro lines built throughout the county with plans for a series of underground sections beneath Cambridge’s medieval town centre.

Unlike a traditional light rail system, the scheme is envisaged to use autonomous vehicles with rubber tyres. 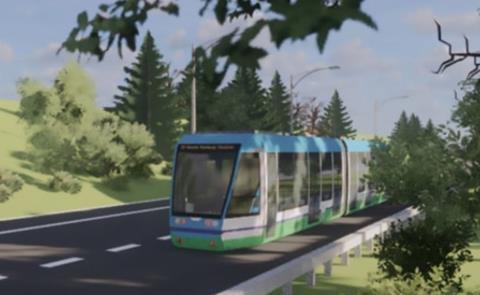 The metro system will use automated vehicles on rubber tyres

Ten firms will be shortlisted for the three-stage competition, launched by Cambridgeshire and Peterborough combined authority, to develop concepts for the Cambridgeshire Autonomous Metro (CAM).

Three firms will then be awarded £200,000 to produce conceptual designs in two design and review stages for the railway over a period of three months, which will then be presented to the combined authority’s mayor, James Palmer.

This will be followed by a third and final design submission, with the competition winner set to be asked to continue working on the project until the end of 2022 in an advisory capacity should their submission be adopted by the council.

Consultants have until 4 November to send in applications, with the job due to start either at the end of December or the beginning of January next year.

Slated for completion in 2029, the metro is considered by the council as essential for improving transport links in one the UK’s fastest growing cities.

A report for the combined authority’s technical advisory committee in May claimed that the scheme’s £4bn price tag could be halved by using smaller vehicles, reducing the cost of tunnelling for the network’s underground sections.