Series of spending pledges made by Rishi Sunak earlier today

The government’s announcement of a national infrastructure bank in today’s Spending Review has received a warm welcome from across the construction industry despite some warning of a lack of detail on skills and green jobs.

The new bank, which has been created partially to replace the European Investment Bank which the UK will leave at the end of the Brexit transition period on 31 December this year, will be based in the north of England and will open next spring. 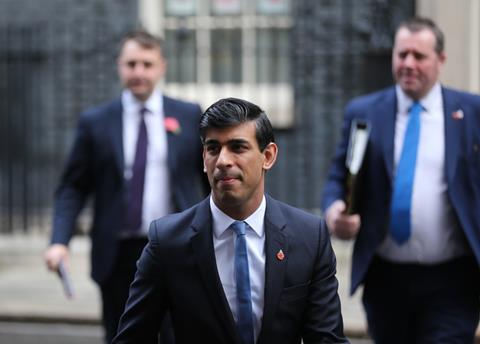 CBI chief economist Rain Newton-Smith said the chancellor had “made some bold autumn decisions to power a spring recovery,” adding: “With the right remit, the bank has the potential to crowd in the private finance that will be crucial to delivering these new projects.”

Chief executive of developer Bruntwood Chris Oglesby said the bank was an idea that had been talked up for years but was “now finally coming to fruition”, adding: “if it has teeth and deep pockets then there is the potential for it improve on the UK’s plodding rate of infrastructure development.”

Atkins UK and Europe chief executive Richard Robinson said; “A single coherent plan is crucial if we’re going to drive up productivity through the efficient delivery of infrastructure projects which provide value to the taxpayer.”

Public sector director at Wates Steve Beechey said the strategy’s commitment to build fairer, faster and greener was “tremendously exciting”, adding that he hopes it will “encourage everyone in our sector to redouble efforts to work towards a zero-carbon future”.

Transport for the North chief executive Barry White was also pleased, saying the strategy “chimes entirely with our priorities for the North – closing the economic divide; fast-tracking delivery of strategic projects; and slashing carbon emissions as quickly as possible”.

Chancellor Rishi Sunak (pictured) also announced a £7.1bn home building fund and a £4.4bn ‘levelling up’ fund for local authorities to use to bankroll local projects.

Reacting to the Home Building Fund, Beechey said housebuilder Wates was “naturally pleased” by the announcement, but added that it needed to be combined with a “fundamental overhaul of our planning system, which is getting in the way of the effort to tackle the UK’s housing crisis”.

Head of strategic research and insight at Arcadis Simon Rawlinson said the Spending Review was overall “a great settlement” considering that the government has already spent £280bn on emergency measures to fight the impact of the covid-19 pandemic.

He added: “This was a real statement of confidence in our industry, motivated by a belief in creating jobs and driving growth across the country through investment.”

WSP head of economics Jim Coleman agreed, and said the focus on infrastructure “gives business and communities reassurance that he remains committed to the levelling up agenda and the transition to net zero”.

He added that the government’s assurance that it would spend £100bn on infrastructure next year “will provide great stimulus to the private sector to invest in skills and collaborative tools to deliver transformational local projects across the UK”.

CITB policy director Steve Radley said the announcements would give firms greater confidence about the future work pipeline but said that it is “critical that the right skills and training interventions are put in place to help people benefit as a result of this investment and give the industry the skills it needs”.

And Federation of Master Builders chief executive Brian Berry said the lack of any mention of green jobs in the chancellor’s speech was “unacceptable given the challenges we face,” adding: ”Failure in this Spending Review to commit to a long-term retrofit strategy or to bring forward the £9.2bn promised in the Conservative manifesto will set the country back.”

Gleeds chairman Richard Steer added: “Our sector is one of the UK’s biggest employers, so while the cost of borrowing is so low, now is the time to invest in the built environment and green economy which will create jobs and makes sound economic sense.”