Construction output grows in 2017 despite nine months of decline 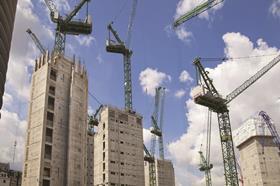 Despite experiencing three consecutive quarterly declines, construction output in the UK grew by 5.1% during 2017.

Strong growth at the end of 2016 and in the first quarter of 2017 made up for declines in quarters two, three and four, representing the most sustained fall in quarterly construction output since 2012.

Output fell by 0.7% in quarter four of 2017, contracting for the eighth consecutive period in the three-month on three-month series.

While output fell in the final three months of 2017, construction output grew in the month-on-month series, increasing by 1.6% in December 2017.

This growth came from a 4% increase in all new work, the largest month-on-month increase since December 2015, largely thank to a £169m increase in infrastructure.

In contrast, total repair and maintenance fell sharply in both the month-on-month and three-month on three-month series, contracting by 2.9% and 2% respectively.

“Unfortunately, the picture doesn’t look quite so rosy this year, following last week’s Markit/CIPS results which indicated that the sector is currently under sizeable pressure.

“Whilst it is true that short term indicators such as Brexit and the downfall of Carillion may put further stress on output in the coming months, the strong underlying demand for new work remains, providing some confidence that the situation will improve throughout the year.”

But Rebecca Larkin, senior economist at the Construction Products Association, was less optimistic.

She said: “Overall growth in construction activity slowed significantly over the course of 2017, with output falling since Q2 and rising only 0.9% in annual terms in Q4. The quarter saw continued growth in private housing driven by five years of the Help to Buy equity loan, and early work on major projects such as the Thames Tideway Tunnel driving a 0.7% rise in infrastructure.

“However, even with the government’s £7.4bn equity loan outlay so far and a further £10bn set aside, house building activity could not offset the broad downturn in R&M, commercial and industrial.”