Industry will be one of most affected in second quarter, Office for Budget Responsibility says

The government’s independent economics forecaster has warned that construction output in the second quarter could collapse by 70%.

The scenario is contained in a breakdown of the impact on industry sectors following the government’s decision to put the country into lockdown to deal with the coronavirus outbreak.

The UK economy could sink by as much as 35% this spring, the Office for Budget Responsibility (OBR) said, with construction one of the worst affected industries.

Only education, with a 90% fall, and accommodation and food services, such as hotels and restaurants, with a fall of 85% are more affected.

The least affected industries are agriculture whose output will remain flat while the financial services and insurance sector will be down by just 5%.

It said unemployment could rise by more than two million to 10% in this quarter but then declines as GDP recovers.

It added that its assessments were based on a three-month lockdown and added: “We assume no lasting economic hit.” 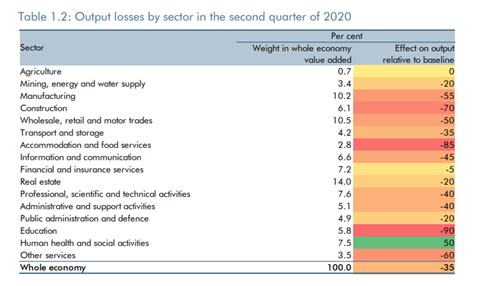