Basildon council in Essex has appointed a contractor to build a new cinema and restaurant complex.

Lincoln-based contractor Simons Construction has been chosen to build the Pollard Thomas Edwards-designed scheme (pictured). The contract is worth £16.7m. 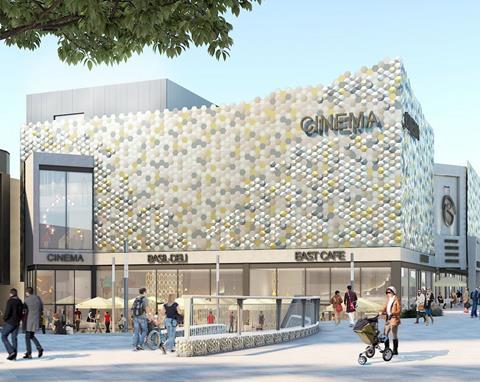 In November 2017, London-based Pollard Thomas Edwards won the deal to draw up plans for the mixed-use scheme.

The revamp of East Square, which is bordered by the grade II listed Brooke House by Sir Basil Spence and Anthony Davies, will include 10 screens at the multiplex cinema.

Alan Ball, the chair of the town’s regeneration committee, said it wanted the East Square area “to be a destination of choice rather than convenience”.

The existing buildings and surrounding area will be demolished to make room for the cinema and additional building and facilities. The area surrounding the site will remain open to the public throughout the build.

Pollard Thomas Edwards has also been doing work in nearby Laindon to revamp that town’s high street with a residential scheme it is carrying out with Danish architect CF Møller.