As £2bn Haringey homes row rumbles on, local authorities told they lack skills to build for themselves 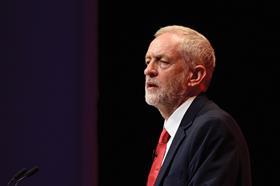 Local councils looking to scrap deals to build more homes with private sector partners and do the work themselves have been told they could face problems bringing in funding and getting enough skilled people to carry out the jobs.

Doubts about private sector involvement in local authority schemes were heightened last month following the election of a new Labour administration in Haringey.

The party had campaigned to scrap the Haringey Development Vehicle, a £2bn joint venture housing and regeneration scheme agreed between Lendlease and the previous Labour council, arguing it effectively “privatised” people’s homes.

Labour leader Jeremy Corbyn (pictured) told Building earlier this month that the initiative in the north London borough should be ditched, and added: “There has to be a new development model.”

Alternatives to working hand-in-hand with private sector firms include creating arms-length, wholly-owned companies to do the work or bringing the jobs in-house.

But Chris Brown, founder of regeneration developer Igloo, said many local authorities are struggling to replicate what specialist private-sector developers can achieve.

“Where local authorities are creating teams, they have struggled. One I saw was initially building homes at double the usual market build cost because it didn’t have the skills to know it was being taken advantage of,” he said.

And John Bull-Diamond, senior director at consultant GVA, which last year authored a paper on housing delivery models for the Future of London think tank, said: “The numbers these housing companies are delivering are not that high. Councils have got to recognise they haven’t all got the resources and staffing to get it going.”

The warnings comes as worries grow that work to build new homes faces being stalled because private sector firms will stop bidding for jobs due to the hostility they are set to face from Labour-run local authorities.

Brown said: “The politics have changed radically. Particularly in Labour authorities, it’s now politically unacceptable to do deals with the private sector.”

Now chair of housing association Peabody, Kerslake added: “There’s going to need to be even better engagement with residents and a credible level of affordable housing offered.”

Lendlease, which is already carrying out the £1bn Tottenham High Road scheme in Haringey alongside the council, has asked for a meeting with the borough’s new leaders following this month’s local election results. New leader Joseph Ejiofor was formally appointed to the role last Thursday.