Number two UK housebuilder Taylor Wimpey has fallen to a pre-tax loss of £40m in the wake of the covid crisis, according to half year results published this morning.

The loss for the six months to 28 June compares to profit of £300m for the same period in 2019 – and come on the back of a 58% slump in completions due to the coronavirus-inspired construction hiatus. 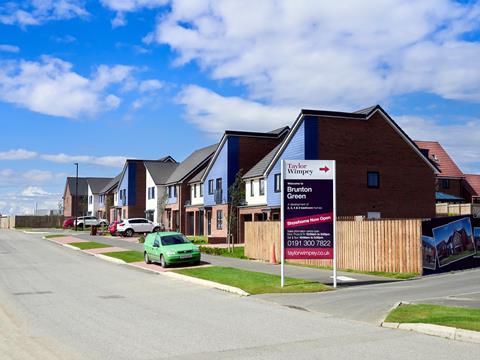 The firm expects full year completions to be down by 40%

The £4bn turnover firm said it built just 2,771 homes in the first half of the year, compared to 6,541 last year, resulting in an equivalent drop in turnover of 57% to just £754m. This caused the collapse in profit as the firm absorbed £39m of additional costs directly related to the covid crisis in addition to the drop in revenue.

It said it now expected completions for the full year to be down around 40%, which the firm said will have “significant impact on revenues and margins in 2020 and will have some knock-on impact on 2021 delivery”.

The firm said that there remained “a high degree of uncertainty in the short term from both the impact of covid-19, particularly on employment, as well as the UK’s exit from the EU but that demand had nevertheless remained robust.

Sales per site per week, which had been running at 0.97 prior to the imposition of lockdown, then fell to around 0.30, from where they have subsequently recovered to 0.70 since the market re-opened.

But it was clear from the firm’s statement that construction remained more of an impediment to its performance than sales, with the business now 97% sold against the homes it hopes to build this year, compared to 87% last year.

It said starts that it had expected to make in the last quarter of this year had been pushed into the first quarter of next, with sites still only running at 80% of usual productivity levels given social distancing requirements.

The statement said the firm had “very limited availability of homes for customers to move into in 2020”.

“This gives us significant confidence for this year’s completions, although reduced availability is likely to mean that sales rates remain below normal until construction catches up.”

The firms said that all employees have now returned to the business from furlough and that all sites had been re-opened. Around half of sales in the period were reliant on the government’s Help to Buy subsidy, which is currently due to end in its current form at the end of the year.

Taylor Wimpey chief executive Pete Redfern said the firm’s balance sheet strength, long order book and our high quality and growing landbank meant the business was confident it will emerge stronger from the pandemic. “While uncertainties remain, we are confident in the underlying fundamentals of the housing market,” he added.