The havoc caused by covid-19 on the industry has been underlined in two new reports with a leading London cost consultant reporting that cut-throat bidding has returned while nearly half of the industry’s quoted firms have issued profit warnings in the first six months of this year.

A string of quoted firms has begun announcing their half year results with all seeing profits fall, with some, including M&E contractor T Clarke, materials firm Breedon and brickmaker Ibstock, slipping into the red.

On Wednesday, the UK economy will officially be declared to be in recession with figures from the Office for National Statistics set to show GDP fell 21% in the three months to June, the second consecutive quarter of falling growth. GDP declined 2.5% in the first three months of the year. 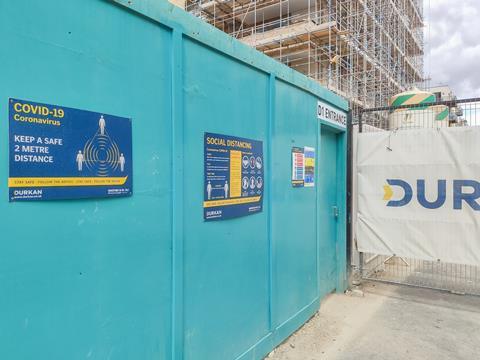 The hit on workloads has prompted Alinea, which is working on a host of high-profile schemes including Laing O’Rourke’s revamp of the Whiteleys shopping centre in west London and Parliament’s Northern Estate job, to raise concerns about the return of suicide bidding.

The cost consultant said it is expecting tender prices to fall 2% this year because of the virus and added: “There is increasing uncertainty in the construction sector as a consequence of the pipeline stalling, fewer projects coming to site and thus a smaller pool of work. This is having a considerable impact on pricing levels and we are seeing a two-track market starting to emerge.

“For smaller projects where there is heightened competition and single stage tendering can be deployed, there is some aggressive pricing with ‘rogue’ tender submissions looking to tactically catch the attention at the point of tender receipt.

“Our feeling is that for larger projects, the tier 1 market will seek to retain a position of equitability. Early trades are pricing at a considerable discount to 2019 levels.”

It said firms should think twice before pricing jobs at “unsustainable” figures and warned prices could go down further still as desperate contractors battle to plug shortfalls in order books: “As ever, there are bound to be instances of greater [tender price] deflation, where an attractive project meets a hungry supply chain.

“Constraining margins and/or underwriting business at a loss is not sustainable. Moreover, we are concerned that the pricing impact of covid-19 will be shunted through the supply chain through commercially aggressive tendering practices and put at the door of a subcontractor that will offer to bear it – but this is not sustainable.”

The warnings come as finance giant EY said 46% of contractors and materials firms listed on the London Stock Exchange had issued profit warnings in the first half of this year.

It said 23 firms had said profits will be hit – up from the 12 who issued warnings in the same period last year and added 91% had said covid-19 was the biggest reason for eating into the bottom line.

Ian Marson, EY’s head of construction in the UK, said: “While profit warnings have decreased in Q2 compared with Q1, construction is still a sector under stress. There is evidence of significant supply chain stress with an increased risk of vulnerability.”

According to EY, almost a third of all the UK’s listed companies issued a profit warning in the first half of 2020, compared to 18% in 2019, with 84% citing the impact of the covid-19 pandemic.