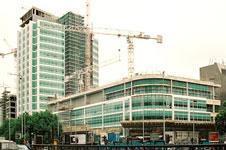 The NHS hospital-building programme could be thrown into disarray by the banks' refusal to provide capital, according to leaked Department of Health documents.

The memo, shown to the Conservatives, said that projects funded through private finance initiative (PFI) arrangements are at serious risk of being hit by the credit crunch.

PFI schemes rely on private construction companies designing, building and financing the build of a new hospital and being paid back the money by the NHS over subsequent years.

But the NHS reportedly has no “plan B” for if PFI schemes fail to get private sector funding. The leaked memo predicts that NHS funds in 2010/11 will become “really tight”.

A Department of Health source told the BBC that it was “absolutely not the case” that the recession had affected the PFI programme.

He said: “There's no question of a go-slow in the hospital-building programme.”

Teams led by Skanska and Carillion are in the final stages of bidding for the £374m PFI contract to build Southmead hospital in Bristol. A decision is expected in February.