Plans to be lodged with Camden council in May 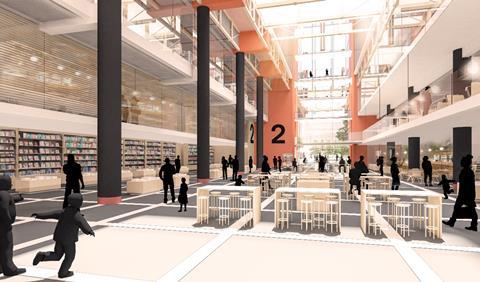 The building will house new premises for the Alan Turing Institute

Proposals by Rogers Stirk Harbour and Partners to extend the grade I-listed British Library in London have attracted criticism from rival architects and heritage groups.

Plans for the scheme, which are due to be lodged with Camden planners in May, will see a block at least 11 storeys built next to and partially attached to the landmark existing building at St Pancras which opened in 1997 and was given the highest form of protection in 2015.

It will include 72,000sq m of office space, 10,000sq m of library facilities and new premises for the Alan Turing Institute.

He told Building’s sister title BD: “The critic in me is bored by this unimaginative office-slab response; and the architect is enraged: how has such a fantastic opportunity ended up with such a bloody awful, third-rate wedge of nothing, with a sort of a kink at the end?”

The project, which is being led by a JV between developers Stanhope and Mitsui Fudosan, will require the demolition of buildings to the north of the library, including the 2007 British Library Centre for Conservation (BLCC).

Designed by Long & Kentish, the practice co-founded by Wilson’s partner MJ Long, the BLCC had been earmarked as a temporary construction compound for the mothballed Crossrail 2 project.

The developers have secured the site by agreeing a deal with Transport for London which will see them carry out the work to build shafts and passageways beneath RSHP’s extension if the railway scheme is revived.

The loss of the BLCC has provoked the ire of modernist architecture heritage organisation Docomomo UK, with a spokesperson saying: “Docomomo opposes these damaging plans which illustrate once again that, despite a high grade of listing, 20th-century buildings are yet to achieve conservation parity with architecture of earlier periods.”

The Twentieth Century Society has also thrown its weight behind objectors, with caseworker Coco Whittaker calling the BLCC an “integral” part of the library. 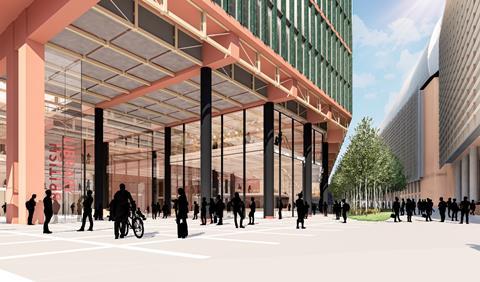