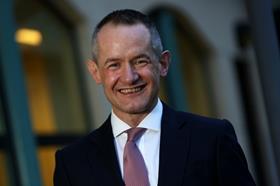 David Allen (pictured) takes up the role of chief financial officer and company secretary at Wates, and will succeed Huw Davies who has retired after ten years with the contractor.

Allen joins the firm with immediate effect from Crossrail, where he had been finance director since March 2009.

He had joined Crossrail from Laing O’Rourke, where he had been finance director for its European construction business.

Commenting on his new role, Allen said: “I am delighted to join the Wates Group at such an exciting point in its development.

“It is a robust business that has built a fantastic platform from which to deliver its strategic plans for the future.”

Wates chief executive Andrew Davies said Allen has joined at an “incredibly important time in Wates’ history”, as the firm looks to hit its “ambitious” turnover target of £2bn.