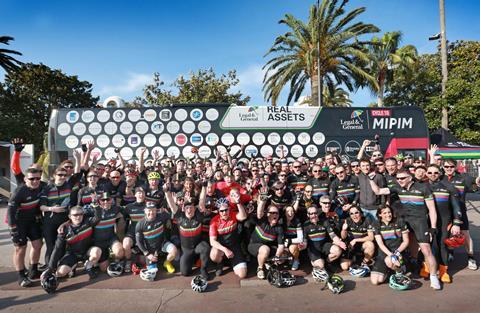 All 125 cyclists participating in the Legal & General Cycle to MIPIM 2016 peloton have passed the finish line in Cannes.

The cyclists have ridden 1,452km in six days through France raising £356,000 and counting for Coram – a charity which helps the UK’s vulnerable children – this year.

Teams from the likes of AHR, Aviva, Broadgate Estates, Elliott Wood, JLL and Savills were welcomed by family and friends, as well as recent Paris-Nice winner Geraint Thomas from Team Sky.

Bill Hughes, head of LGIM Real Assets, said the past six days had been exhausting, but the team rose to the challenge despite some “frosty starts”.

He added “It is rare to have the opportunity to spend six days in a non-work environment with such a cross section of the real estate industry. I have met some friends for life as well as some new business contacts, who I am hoping I can now enjoy a well-earned drink with at MIPIM!”