Complex will be built at former factory in Essex town

London mayor Sadiq Khan has given the green light to a £110m plan by PRP Architects to build new film studios in Dagenham.

The scheme, which was approved by local councillors last month, is being masterminded by Barking and Dagenham’s regeneration company Be First which has pledged more than £3m to cover any pre-development costs. 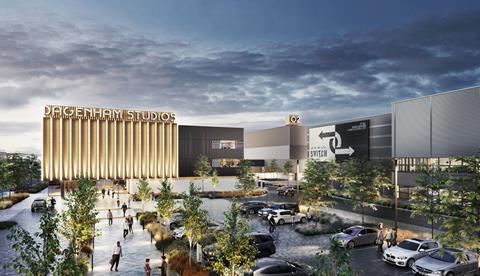 Last week the government awarded a £5m grant to the studios as part of the Getting Building Fund.

Jules Pipe, deputy mayor for planning, this week took the decision to allow Barking & Dagenham to determine the planning case itself.

The complex will be built at a 20-acre plot opposite Dagenham East train station at a site previously occupied by French pharmaceutical firm Sanofi.

The Made in Dagenham studios will eventually include six sound stages, training facilities, amusement attractions, shops and restaurants.

Be First, which is masterminding a £1bn revamp of the area, said it was in talks with joint venture partners about the studios. The firm said it could end up building out the site and leasing it back to an operator. Its managing director Pay Hayes said: “We’re now assessing our delivery options and we expect to make a further announcement late in the autumn.”

Last autumn, the original preferred bidder to run the site pulled out citing the then impasse over Brexit.

Pacifica Ventures, the Los Angeles-based studio behind the hit TV series Breaking Bad, was made preferred bidder for the site in 2018.