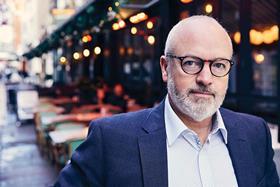 Consultant Dar is planning a recruitment drive over the next couple of years as it looks to treble turnover to £45m.

The firm is part of the Beirut-based $2.5bn (£1.96bn) group of the same name, which also owns consultant Currie & Brown as well as architect Perkins+Will.

Dar’s UK managing director Andrew Loudon (pictured), who spent 25 years at Currie & Brown before switching to Dar three years ago, told Building the firm wants to significantly increase the number of people on its payroll under the expansion plan.

Dar employs 120 people from its office in Marylebone and has a current annual income of around £15m. “We’re certainly looking to double, treble that in two or three years’ time,” he said. “We’d be getting up towards 500 people over the next three years.”

The firm specialises at the front-end disciplines of a project such as planning and urban design, masterplanning and economics.

In the UK, Dar is working on HS2 as well as some business parks in Southampton. He admitted: “Absolutely we are small, but we want to grow.”

He said the firm was looking at opportunities around infrastructure and regeneration schemes such as the “Northern Powerhouse”, the “Midlands Engine” and the redevelopment of Old Oak Common in west London.

Designed by Perkins+Will, the eight-storey building will be ready for occupation by the middle of 2021. It will be home to more than 1,000 staff from Dar, Currie & Brown and Perkins+Will. Main contractor McLaren is set to start work on the £80m construction contract in the middle of next year.

Loudon also shrugged off worries about Brexit, admitting his bosses in Beirut rarely ask him about the topic. “They don’t raise it a great deal,” he said. “From our point of view, we don’t see it as a massive issue for our business. We’re still investing in the UK.”