Dar, the Lebanese firm that owns consultant Currie & Brown and architect Perkins + Will, has appointed McLaren Construction to build its new headquarters in London’s Holborn district.

The $2.7bn turnover firm wants to build a new 185,000 sq ft mixed-used scheme on a site at 150 Holborn next door to the grade II* listed Victorian gothic Prudential building and close to the headquarters of supermarket firm Sainsbury’s.

Demolition contractor John F Hunt will begin tearing down the current 1980s building this August with main construction work on its nine-storey replacement starting in December. Work is expected to finish in late 2020.

The new building, which has been designed by Perkins + Will, will house around 1,100 of Dar’s staff with 350 of them being from the architect.

Dar’s UK managing director Andrew Loudon has previously said the firm is targeting work in the UK with the new London HQ for Dar signalling the beginning of a major push into the UK property and infrastructure worlds.

He added: “Our new HQ in Holborn is a demonstration of commitment to the UK.”

The Holborn scheme was given planning by Camden council just before Christmas despite objections from the City of London because of its impact on neighbouring heritage assets including the grade I-listed 1-4 Holborn Bars, which date back to the 16th century and are part of a run of timber-framed buildings.

McLaren is currently on site with a £40m deal to turn the former Guardian building at 119 Farringdon Road into an office complex called the Ray which has been designed by AHMM. 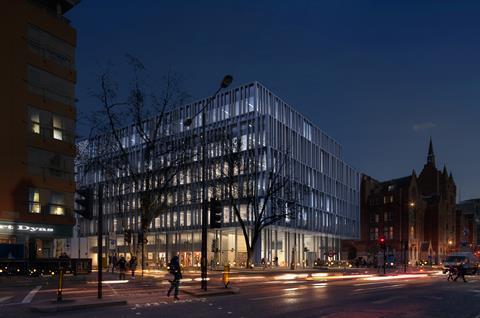 The new headquarters will be home to around 1,100 staff